Did you say unique ?

In the heart of Loiret, just 2 hours from Paris, the unassuming village of Germigny-des-Prés is home to one of France’s unique treasures: the Carolingian Oratory. Dating back to the year 806, it is one of the oldest churches in France. Renowned in particular for its exceptional mosaic, it bears witness to the Carolingian period, under the reign of Charlemagne (aka Charles the Great). 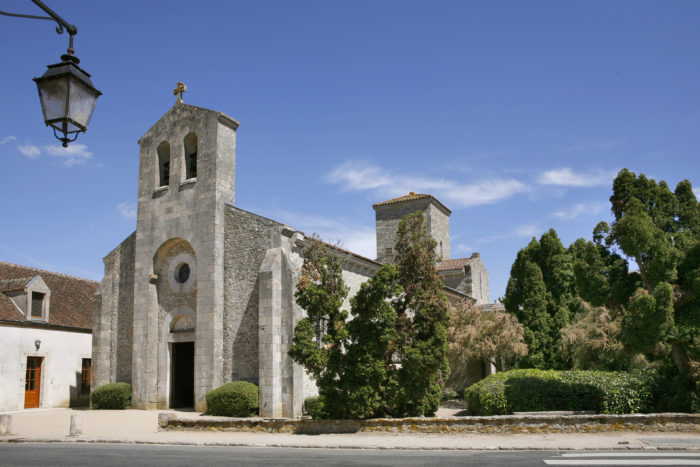 During the Gallo-Roman period, Germanicus had a villa built in Germigny-des-Prés and had the village named after him. In the 6th and 7th centuries, the abbots of Fleury Abbey in Saint-Benoît-sur-Loire adopted the villa as their secondary place of residence. Then, in the 9th century, Theodulf, one of Charlemagne’s most faithful advisers purchased the property.

Originally from northern Spain, he was Abbot of Fleury Abbey then Bishop of Orléans. A writer, poet and theologian, he participated in the Carolingian Renaissance initiated by Charlemagne.

It was in the 11th century that Theodulf of Orléans had the Oratory (from the Latin ‘orare’ meaning to pray) built. He commissioned a sumptuously decorated building with mosaics, marquetry and marble. Designed to serve as a private place for prayer, it was built close to the villa and reserved for use by the latter’s owner. It was inaugurated in January 806. At that point in time, the Oratory, built in the form of a Greek cross, was of a surface area of only ten square metres! It comprised a central lantern tower, and 4 aisles leading to apses. There were also two apsidioles (smaller apses) on either side of the east apse. Inside, the four pillars, surrounded with horseshoe arches are of Arabic and Visigothic inspiration.

Theodulf sought inspiration in ancient and Byzantine monuments, such as the Mausoleum of Galla Placidia in Ravenna (Italy) and Charlemagne’s Palatine Chapel in Aachen, for his oratory’s architecture and mosaics. 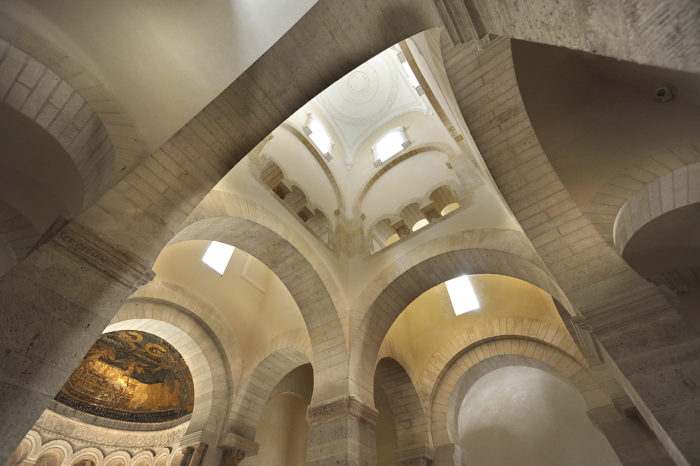 From Norman invasions to the Wars of Religion, the Oratory in Germigny suffered fires and other deteriorations which left it in a sorry state. In the 15th century, the building was transformed into a parish church and a nave was added.

The Carolingian Oratory is a listed Historic Monument since 1840. It was one of the first buildings in France to be awarded this distinction. Major restoration work was initiated as from 1867 and the Oratory was partly rebuilt. Work was undertaken under the direction of the chief architect for Historic Monuments, Juste Lisch.

Today, all that remains of the sumptuous adornments mentioned above is the famous mosaic, which covers the semi-dome vault at the church’s extremity. Concealed under a protective coating, this genuine jewel was discovered when, in 1820, children, who were playing in the vault, found mosaic tesserae (small cubes of glass) on the ground. It is the only remaining preserved Carolingian mosaic in France. Measuring 9m2, the work is comprised of 130,000 tesserae in gold, silver, glass and stone.

It represents the Ark of the Covenant: a gilded chest which, according to the Bible, contains the Tables of the Law, given to Moses on Mont Sinai.  Here, the chest is decorated with two gilded cherub sculptures.  This iconography is extremely rare for, at the time, representations of the Christ in Majesty, or of the Virgin Mary, were more popular.

It appears that Theodulf of Orléans had an aversion to iconography. Indeed, he refused to represent God, Christ, the Virgin Mary and the Saints. He preferred not to represent them in human form, to avoid encouraging idolatry. Hence, he represented the Ark of the Covenant, to evoke the Divine and the Word of God, without illustrating them. His choice brings to mind Byzantine Iconoclasm (periods of the ‘war on icons’) in the 8th and 9th centuries, during which the Church suffered crises, with Christians quarrelling over the question of images in places of worship. Consequently, very many images were destroyed by iconoclasts.

The following inscription can be seen under the Ark :

‘As you gaze upon the holy propitiatorium and Cherubim, beholder, And see the shimmering of the Ark of God’s covenant, Perceiving these things, and prepared to beset the Thunderer with prayers, And, I beg you, Theodulf’s name to your invocations.’ 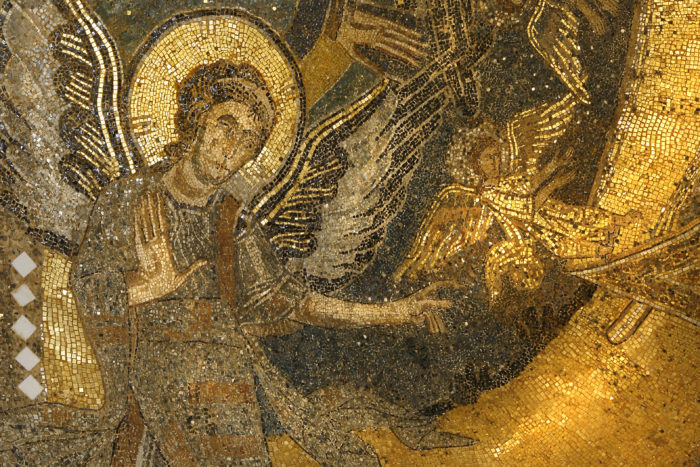 Today, the church still houses some treasures, including a 16th century Burgundian School Pietà carved in oak. Other statues adorn the building: a 17th century Virgin and Child, an early 15th century statue of St. Anne, and 16th century statues of St. Baudèle and St. Vincent.

The ceiling light fittings date from 2003. They were designed and created by the Ateliers Loire studio in Chartres (Eure-et-Loire) and their shape is evocative of that of Carolingian royal crowns. Their glass panels also represent Christian symbols, such as fish, St. Peter’s keys, Alpha and Omega.

The Oratory is open all year, free of charge.
From April to September: 9.30am – 6.30pm
From October to March: 10am – 5pm
Free guide sheets and audio-guides (€3) are available at the Tourist Office.

Our guide-lecturers are delighted to accompany you on your delve into History ! Consult our guided tours. 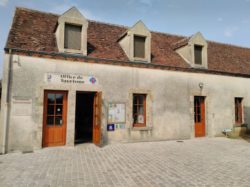